This topic keeps on popping up in Creationist circles. Robert sent in the link to Dr Wile, a cool headed chap, but somebody certain that soft tissue fossils disprove the idea of an aged earth. At https://blog.drwile.com/more-incredible-dinosaur-soft-tissue-results/ … we learn that some of these have been collated on to a video by Mark Armitage and Dr Wile has posted  said video online (at the link above). They include vein valves so clearly some sort of instant fossilisation must be inferred. Whereas this clearly is in opposition to mainstream ideas of fossilisation, slowly and gradually, it is not necessarily against the idea of rapid and quick fossilisation (immediate burial and preservation during a catastrophic incident of some kind). In electric universe circles we hear about fossilisation by electricity – instantly turning wood into stone (for example) and petrification of animal remains. At a particular sand layer in the UK you can pick up pieces of petrified wood that date as ancient as the Jurassic period, buried in the sand along with other detritis from a great storm. Wood is soft tissue – but somewhat more hardy than a vein or a valve within a vein. It is truly a remarkable discovery by Mr Armitage.

Funnily enough, a similar discussion (on the longevity or otherwise of earth history) has popped up on the New Chronology forum – see NewChronology [at] groups [dot] io … which is supposed to discuss the fors and againsts of David Rohl's chronological revision as outlined in his various books. One of the commenters quotes the geologist Derek Ager (who has previously been mentioned on the News), to the effect, accepts that catastrophic events have been preserved in sedimentary layers, such as a Carboniferous tree still standing in coal measures. He added, obviously, sedimentation had to be rapid in order to bury the tree before it rotted and fell down. Ager refers to various other trees in Devonian srata in fossil forests of the US, or in the Jurassic (at Lulworth Cove in Dorset), and a  whole forest of Miocene trees buried in volcanic ash at Yellowstone National Park in the US, and a petrified forest of Gingko trees in Washington State. One tree in the Lancashire coal field was still standing – at 10m in height. How did that happen if it was not immediately covered and preserved.

Hence, one may note that rapid fossilisation is not necessary a problem even for mainstream geologists – such as Derek Ager. Only the unimaginative insist all sediments were laid down slowly and gradually – or that fossils slowly became fossilised Some geologists use it to make a point – as in a recent story about the Deccan Traps active prior to the K/T boundary event. However, fossils can be preserved by other means – such as in amber (tree resin). At https://phys.org/news/2020-01-million-years-amber-oldest-fossilized.html .. we have slime mould – dating back 100 million years ago. It is described as exquisitely preserved. These are microscopic organisms that live most of the time as single mobile cells hidden in the soil or in rotting wood, where they live on bacteria. However, on occasion they join together and form beautiful and delicate fruiting bodies which make and spread spores. Naturally, fossil lime moulds are rare – especially as the fruiting bodies are very short lived. The researchers, it is alleged, are astounded at the chain of events that led to the preservation of these fossils in amber. They clearly have to sustain the mainstream position and speculate that lizards prized them from tree bark and were then caught in the sticky tree resin and finally embedded in it together with the reptile – and again they were surprised as the slime mould was akin to modern examples (yet is dated 100 million years ago). I'm sure Dr Wile can have a whale of a feast at their expense. 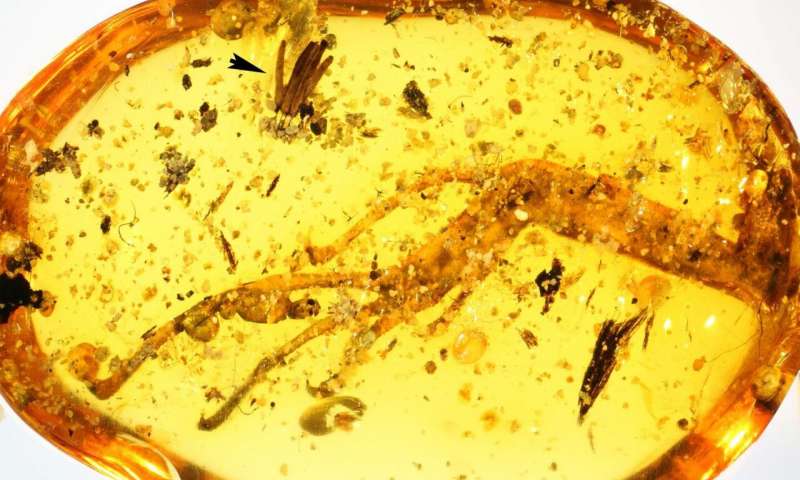 … and over at https://phys.org/news/2020-01-clues-year-old-brain-survived-modern.html … we have another clue to how soft tissue  might survive. This time part of a human brain found in a water logged pit. The victim seems to have been decapitated … 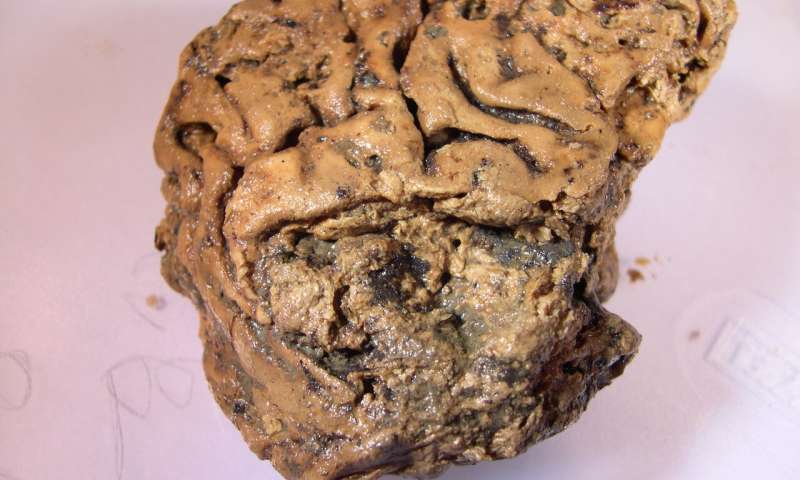 … and dates back to around 600BC. He was found near the village of Heslington and mysteriously, no other parts of the head such as hair or skin were in evidence. The big question facing archaeologists – how did the brain tissue survive. Typically it starts to decay moments after death as a result of its fatty content. Looking at the  tissue from a molecular level they noted various proteins that were somewhat more hardier. They found over 800 proteins in the brain sample which were all in good condition. These proteins had folded themselves into what they called a tightly packed stable state. More stable in fact than in typical living brain tissue. In this way the tissue staved off decomposition – presumably as a result of the environment it fell into (a watery ditch or pit). Fine grained sediments may have locked out oxygen that  flesh eating microorganisms would have needed to survive.

The preservation of brain tissue is however nothing new as the SIS Catastrophism CD Rom has an article by one Robert W Alrutz, 'The Newark Holy Stones' which concerns the discovery of Native American mounds in Newark in Ohio (back in the day). In it the writer refers to bog bodies found in Denmark in more recent times – also renowned as mound builders. Clay held the water so well in some of these mounds it held water so that the bodies remained in a well preserved state. When the coffins were cut open water poured out. The crunch line is that the brain tissue was intact. How that pans out in Ohio is unclear – but bodies could have been preserved and may have been dug out by early settlers in the US (which is what the story was about). It is unclear if the Danish (or British) bog bodies had intact brain tissue (going by the article) but the so called 'mound people' did so (and there was a book with that title a few moons ago).