At https://climatechangedispatch.com/geologic-heat-ocean-warming/ … one of the favourite alarmist memes is that of ocean warming – and ocean warming off the east coast of the US has been a happy hunting ground for them. Well, it seems reality is kicking in – overriding climate change dogma. The geology of the region is very interesting – in more ways than one. There is a large continental shelf system making for a fairly shallow sea off the coast  of North America. It has been dry land at various points in the geological past. Hence, the heating trend has developed in a shallow sea and sea surface maps (SST) since 1997 (when SST was first introduced) have been consistent in showing such a trend. Which leads to these points, i) It is likely this heating trend goes back thousands of years and is not a modern phenomenon, ii) the SST mapping system measures global ocean temperatures by combining satellite and ocean buoy data. Every few days NOAA posts an update. iii) SST data shows the East Coast warming trend is the only very strong warming feature ever revealed along the entirety of the eastern coast waters. iv) the sea floor heat source point has never moved. It has been consistent since 1997. v) Analysis shows the heat source is primarily geological in nature. The warming trend is the result of emissions from the seafloor – such as a hydrothermal vent.

Sea floor methane emissions and super heated fluid emissions from hydrothermal vents are known from elsewhere – such as along the Galapagos Rift (an oceanic fault system) and another vent NE of Greenland (to the west of the Svalbard Islands in the Fram Strait. Here, seeping of methane is aligned in a linear trend parallel to well documented faults associated with a 1000 mile long chain of sea floor volcanoes and hydrothermal vents. They emit large amounts of super heated methane rich liquid into the oceans. Some of the volcanoes are just 20m below the sea surface – very shallow. It is quite possible that at one stage they were islands (and could be again at some point in the future). All it takes is a drop in sea levels. Iceland can be seen as having a similar make-up as it has volcanic activity and hot springs.

At https://climatechangedispatch.com/arctic-crew-sidelined-dense-sea-ice/ … which is derived from a post at https://notrickszone.com/2020/02/26/exchange-of-arctic-research-crew-get… … a German research ship, the Polarstern, cannot get supplies or exchange crew members as a result of unexpected dense sea ice in Arctic waters. Surely this must be wrong. Sea ice, we have been assured, is disappearing – and should not exist by now. No wonder the media are studiously ignoring this uncomfortable fact of life …. 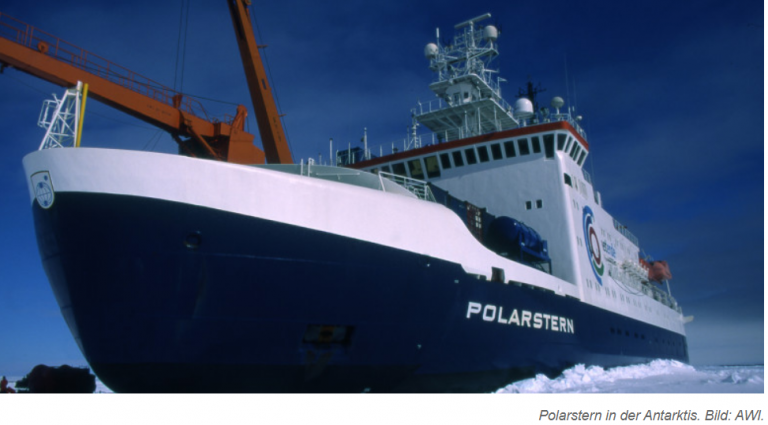 … and here she blows. The German research vessel, on a global warming expedition to the Arctic. This is reminiscent of the situation a decade or so  when ice breakers became locked in sea ice near the southern continent – unable to reach a ship full of global warming sight seeing tourists (and researchers). They haven't tried to do that again – not in the season that is. I wonder if we will get sight seeing trips to the Arctic cancelled over the next few years as sea ice is returning back to 1980s levels. It's all a cycle after all and a pretty well known one too (except to the alarmists). The Polarstern has a crew of 300 and is supplied and exchanged every three months by an international fleet of ice breakers, helicopters, and aircraft (all using lots of co2 rich fuels)_.

Lastly, and not least, we have https://climatechangedispatch.com/scientists-polar-bears-good-news/ … which may also be derived from the German blog of Pierre Gosselin (see https://notrickszone.com/2020/02/27/new-research-polar-bears-seal-diet-h… …. it is being suggested by polar bear specialist Susan Crockford, a Canadian zoologist that has a habit of upsetting the alarmists, as well as some of her colleagues, that scientists are witholding information about the actual numbers of polar bears. Data on the body condition of female bears and the survival of cubs in western Hudson Bay has not been published for 25 years. Why? It seems the data does not support the claim of a disaster afflicting the polar bear population. On the contrary, they are actually thriving. Who would have thought that. Deliberate erasing of evidence by simply not reporting it in the first instance.