Robert sent in this link – https://crev.info/2020/04/surprising-fossils-dinosaurs/ … three related stories that have already been posted on the News. Dinosaur footprints in a cave is the most ambiguous of those David Coppedge has brought together in a single post. His geology is 100 per cent Biblical flood related – but don't let that put you off. He begins with a little rant and says paleontologists force fit every bone, every piece of amber with an insect inside, and every fossil into their own creation myth – the uniformitarian model and timescale. This is obvious when any new bit of information emerges – it has to be compartmentalised. Not sure Coppedge is entirely right though as far as conformity is concerned, and humnas seem to need boxes in which to put things so they can be labelled and stacked away. It's keeping the house tidy – getting rid of the clutter. If something cannot be explained better it is boxed up and forgotten until some new information turns up. It's what we do as people and scientists are no different.

Anyway, the stories themselves are interesting – footprints of a giant dinosaur found in a cave in France. Actually, found on the roof of a cave. This is the best part of the story. How do you get footprints on the roof of a cave. The answer of course has a geological explanation – the sediments in which the footprints were made have been buried and and tilted. The footprints have been dated at 60 million years ago and at that time were at the surface. Time, and a succession of catastrophic events have skewed the deposit and hollowed out the cave. The footprints are now 500m under ground and it is a fact dinosaur footprints have been found in mines and in tunnels (but rarely in a cave we are told).

The second anomaly concerns the Karoo fire walkers. Trackways of bidped dinosaurs and mammals within a deposit that includes lava (from a volcanic eruption) and water (which played an unknown role). Does this not sound like the Biblical flood he asks – like a flood came and quickly buried the footprints during a tectonic upheaval. It might be evidence of a catastrophe but probably has nothing to do with Noah and his flood. You would have to concertina a lot of geology to get there. Of course, mainstream geologists intepret in a gentle manner – slowly and gradually as far as time scale is concerned. It occurred in a seasonally dry climate as a result of a flash flood (itself sort of catastrophic but extremely muted in scope). It requires the flash flood to have periodically washed over the landescaped and repeated eruptions of basaltic lava flows. Instead of 'repeated' flash floods and eruptions of lava why not a single catastrophic event of some magnitude. Coppedge is quite in his right to criticise the mainstream explanation – and it seems it is mainly creationists that are providing any kind of resistance to the entrenched geological scenario.

The third story involves a lizard head entombed in amber. Coppedge makes the point that it was initially identifed as the head of a humming bird like creature. It was found in Cretaceous sediments and this is thought prior to the appearance of such birds as the dinosaurs ruled the landscape and only after their demise did birds evolve. Seems like we've been here before with mammal fossils found in contexts that one could attribute to the K/T boundary event. If geology is basically a record of a succession of catastrophic events, many of them global in scope, then we do not have a complete evolutionary record – or when mammals and birds first appeared. We only know about those points in time when they died. However, Coppedge raises another interesting point. He says they are still forcing uncooperative evidence into the timescale and have been doing this for well over a century. In other words, he is sceptical of its change of creature, from bird to lizard. Lizards lived during the dinosaur era but birds are not thought to have done so. So, what is it, a bird or a lizard? An interesting idea. Must say it has never occurred to me and I try to be as sceptical as possible. 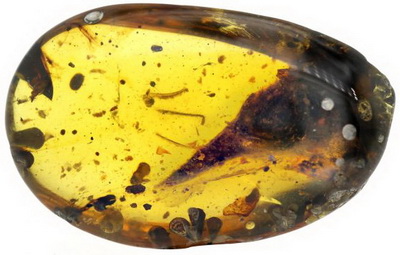