At https://phys.org/news/2020-06-aerial-technology-largest-pictish-settleme… … this comes courtesy of The Conservation, a media source that has good ones amidst lots of corny or very bad stories. The Tap O'Noth is a famous hill fort near Rhynie in Aberdeenshire. It is situated on a hill above the village of Rhynie. Drone footage by an aerial 3D laser scanning device has revealed a huge settlement dating from the 3rd to the 6th centuries AD. The hill fort was occupied before that, at the same time hill forts became common features of hills right across Britain, north to south – in the Iron Age. Some 800 dwelling platforms were found by the drone which could have housed up to 4000 people. That is a lot of people during what became known as the Dark Age in post-Roman Britain. There is a lot of evidence to say that populations fell in the 6th century AD, as a result of plague and various other factors, such as a very cold blip in the weather leading to limited harvests. This is  the largest settlement of the period in Scotland, virtually a town on a par with urban centres in southern Britain. The people would have presumably lived down in the valley where the soil is fertile prior to the 3rd century AD, when things began to  go wrong for the Picts. They are recorded in Roman sources as a thorn in the flesh, trying to migrate southwards. This situation continued into the post Roman 5th and 6th centuries AD and Angle and Saxon mercenaries were recruited in an attempt to limit their depradations. Steve Mitchell provided a reason for their desire to migrate – rising waters. In C & C Review 2005 he had his seminal article, 'When the Sea Flooded Britain' published and in it he catalogued rising waters right across Britain. This was not solely due to isostatic rebound from the Ice Age as even southern Britain, which is thought to be sinking, was affected by rising sea levels. Indeed, the tiodal reach of the Thames appears to have reached almost to Maidenhead – much further inland than it is nowadays. This is one of the most important studies published by SIS as it involves a period of history that still flummoxes modern historians. 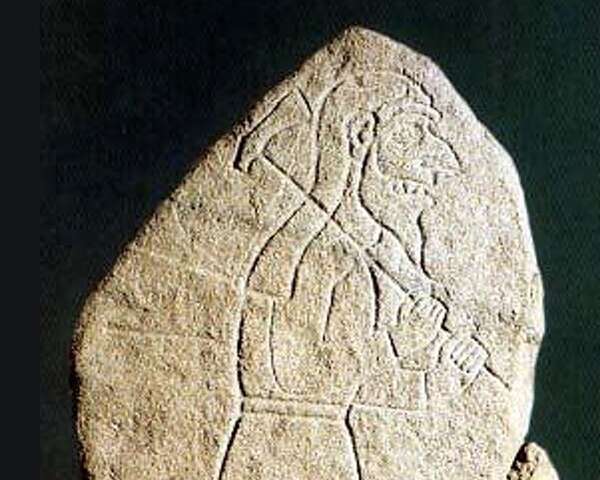 …   The Rhynie Man stone was found a few years back in a field on the outskirts of the village of Rhynies. It appears to represent a deity of some kind, carrying an axe. Archaeologists have suggested it had a cultic significance to do with animal sacrifice, otherwise not very well attested. It could equally represent the thunderbolt – a deity associated with tossing meteors towards the earth. 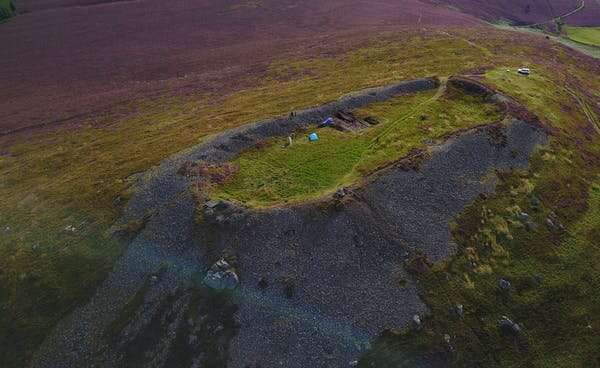 …   the Tap O'Noth is the second highest hill fort in Scotland. It is also a vitrified fort. At some stage its timber, stone, and earth ramparts were set on fire and left to burn out, vitrying some of the stones. This is thought to have been purposeful but the reason why is unknown as vitrification doesn't appear to have strengthened the fortifications. Indeed, the opposite appears to be the case which led to the idea vitrified forts may have been torched at the end of their occupation, as a form of closure. Perhaps the fort was abandoned when the water level subsided and people were able to return to their farms below. Although if the vitrification is dated to the first millennium BC that would be a problem for such a theory. Perhaps there was some other kind of crisis which evades us nowadays.

The more ancient fort is concealed by a massive 16 hectares earth enclosure (see image above). The vitried remains have been C14 dated to between 400 and 100BC. However, the housing platforms are much later, and date between the 3rd to 6th centuries AD when sea levels were rising all around Britain and the near continent. This was also the height of Pictish activity, suggesting it was kick started by loss of farm land and suitable places to live. The period is also thought to involve climate change – the end of the Roman Warm Period coinciding with the 3rd century, and cooler temperatures, and less yields on farms, being a problem – especially in Scotland. A similar cool period during the Little Ice Age led to the abandonment of many crofts across the Highland zone. Short summers = half grown crops.